The Downhill Only Club

I hope you’ve all enjoyed some sunny days of late? It has been hot hot hot in Wengen. The surrounding area too. Astonishingly even this morning (26th February 2021) the more northern facing slopes (this is pisted slopes) were still in magnificent condition. This is probably because of the angle of the sun at this time of year. The northern slopes had not warmed enough to become wet. So, they didn’t freeze solid at night. Where as the more southern slopes were pretty hard. Another, interesting thing (I think) over this sunny February is the number of early risers. There has been an 08:09 cable car for the last 4 mornings at least. That was because there was already a full load in the holding area. That was of course because we can only have 45 on each car. Everything has a knock on effect!

There has been other people skiing too.

If you’ve read my blog before you’ll know I love a YouTube link. So, here’s something I’ve been watching. The freeride world tour has managed two stops at the same destination. Phenomenal skills. This was #1.

Then because they’d missed Hakuba in Japan, they did stop 2 here too. Same riders, same venue, oh so different.

Of course although we miss everyone the mountains remain. They’ve started glowing pink or red of an evening. The swiss cross has been appearing on the Jungfrau. Lachlan has been making motivational films about skiing, I’ll add a link to one at the end. Hopefully you’ve seen the Wengen Village Spirit film…. but if not, here it is:

A video from Wengen – Downhill Only Ski Club

Other films and pictures

I’ve managed a few live facebook posts recently, although I’ve been so far unable to get them off Facebook to share on another platform. Which, is annoying. Should I solve this problem, I will share them then! In one I was going for a peaceful morning before the bedlam of the slopes at half term. This, was in response to a special request from Daniel. He asked me to have a coffee and piece of chocolate from the kiosk and look towards Murren. Then I was tell him how I felt. So I did. Even with the disturbance of the phone and filming, still a very tranquil experience. Tweeting birds, rumbling trucks and a magnificent vista.

The other was a run down distleboden on another day with a very yellow sky, I think more sand from the sahara. Maybe just polution blowing in from somewhere. The clarity on the hill was perfect. The snow was soft and grippy. The space was sufficient and it was great fun.

This popped up on my Facebook feed from 5 years ago. It was the first time I’d skied with a camera, not very succesful!

Here’s a sneeky wee advert: https://jamescampbelltours.com/ my pal in Edinburgh, for your holiday needs until you can get to Switzerland!

Proud Dad moment. Lachlan is getting into his skiing and enjoying the skill aquisition side of things as well as just hammering around the mountain. So, here is a very brief lesson in one legged skiing:

Check out the different sky in these two pictures from the same location, differnet days: 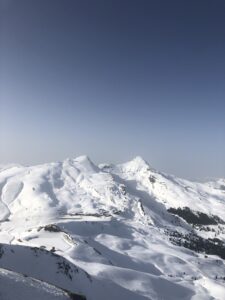 And so, I hope you enjoyed some of the shared video’s, here’s some pictures from the last week or so: 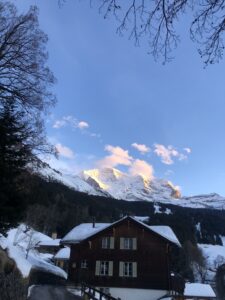 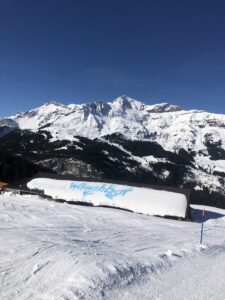 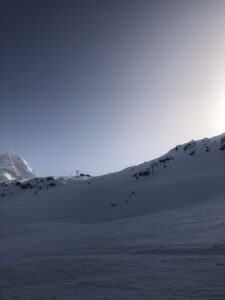 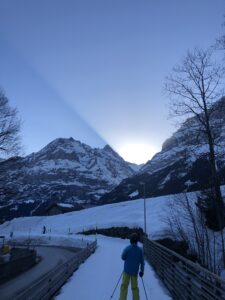 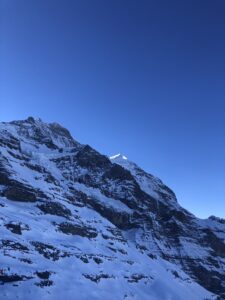 Thanks for reading, I hope as always this finds you well? Live well, love much, laugh often!

Wait.
Have you thought about signing up to our newsletter?