The Downhill Only Club

Now this is the Coggins week & the Polytechnic; a race since 1926 & a few other cups too!

At February half term we run Coggins and they race in the Polytechnic. This is now a race of several parts, perhaps multiplying again in the future. The well trained Coggins race this GS type course on the Lauberhorn downhill piste. We run from the Start Hut down and round the first corner, over the Russi Sprung and finish at the end of the reservoir. Fantastic. The Polytechnic Cup has been awarded since 1926. It is now awarded to the fastest over 18 year old racing on the day. We also award the Gillian Davies Cup to the fastest 18 and under on the day.

Of course during Half Term we also run our Coggins and Eagles ski groups. Whats that you say. Well it has been many things. It has always been ‘Fun, Fast Skiing for children  7 to 13 year old. Also Adventurous all mountain skiing for those still keen to be involved up to 17 or 18. For the last 20 years or so, Coggins has been providing the some of highest quality ski coaching available for the age group and has consistently produced many fine, confident skiers. FYI, it could run at Easter if you contact Bob and get booked in. https://www.downhillonly.com/coggins/

From the Coggins and Eagles groups there is the Junior Polytechnic Cup, the Snoggin’s Cup and this year recognition for the Eaglets! (They are the in between Coggins and Eagles this year). The Gillian Davies is awarded to the fastest 18 and under (Sorry Freddie). It is all good Craic, and some of the parents are discovered to be pretty fast. However, sadly for us older ones not many are as fast as we’d like. Here’s the full list: 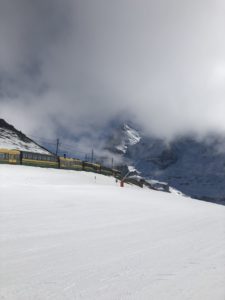 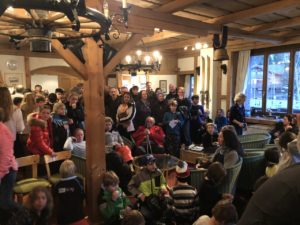 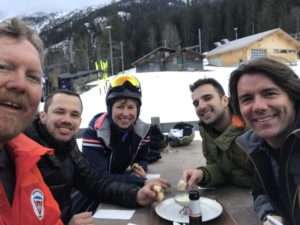 We’ve had some magnificent sunsets over the last few evenings. The folk in the picture are part of my class 2 group from Ski School last week.

Are you reminisicing about your completed holiday this year, or looking forward to your spring holiday? It’s either been great or it’s going to be!

FYI, if you still have time or for next years planning – this still seems to be the cheapest way to get your lift ticket: https://www.jungfrau.ch/en-gb/jungfrau-ski-region/earlybird-skipass/

Wait.
Have you thought about signing up to our newsletter?